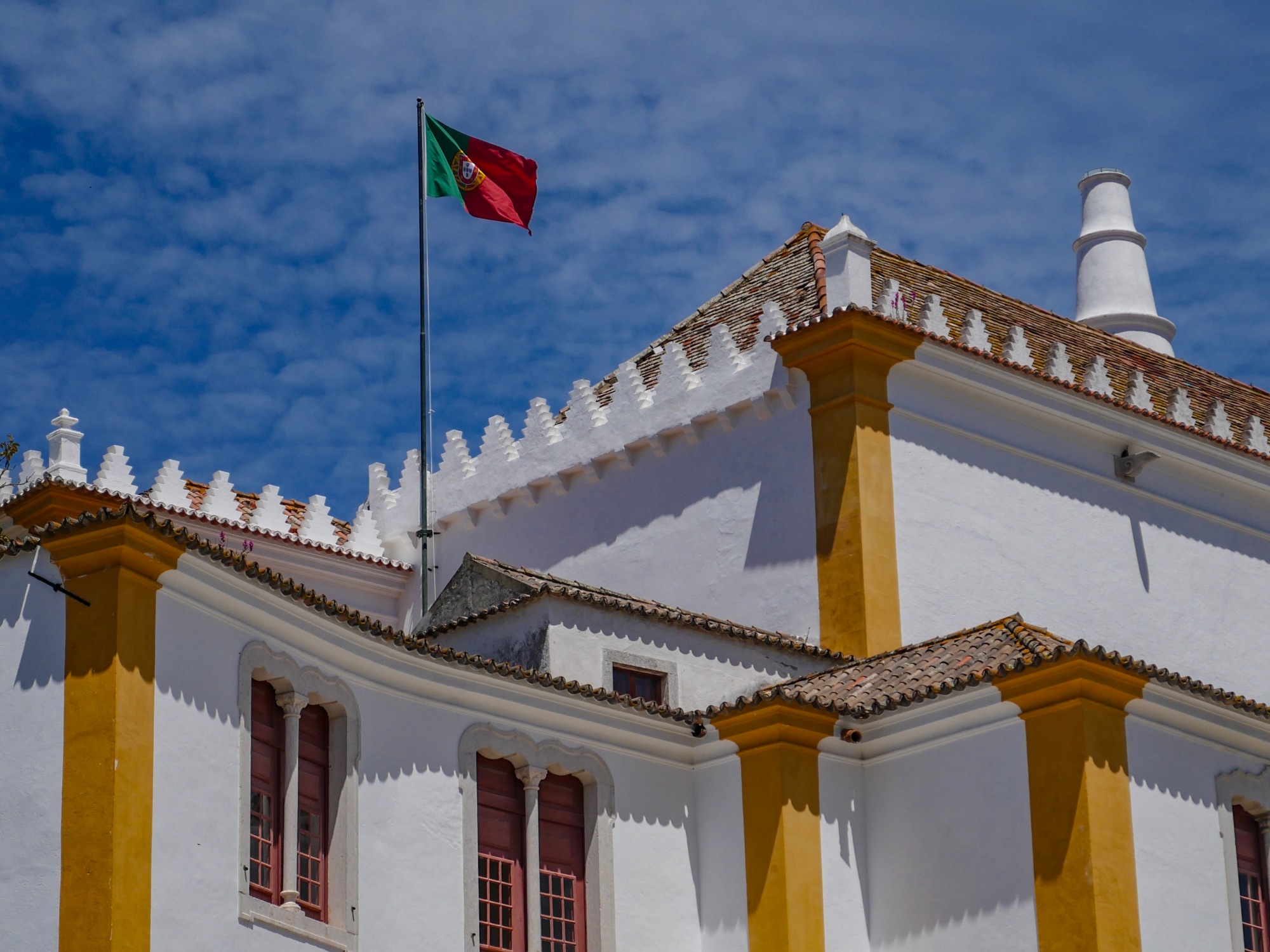 Following Portugal’s win at the Eurovision Song Contest in 2017, this year’s edition would be held in Lisbon. Portugal is a country that we had always heard great things about and being the only country in Southern (Mainland) Europe that Todd had not been to, we saw it as the perfect opportunity to visit. We opted to hire a car in Madrid and drive the five and half hours over the 45 minute flight to avoid the hassle of luggage weights, security checks and just the general level of anxiety that comes with flying. It was actually cheaper for us to hire the car for 8 days with a pick up and drop in Spain, including paid parking at Lisbon airport for the entirety of our stay, than it was to hire it for one day with a one-way, international drop off from Spain to Portugal.

The drive was uneventful; just a casual 150 KM/H along the autovía with cars still tailgating and beeping at you to go faster, and round-a-bouts with four to five lanes, that appear to not have any rules as to which ones you can enter or exit from. There were buses crossing from the inside lane in order to exit, cutting in front of us without warning. We always joke that Todd drives like he is in Europe, even back home and this is true, however, what we didn’t prepare for is that everybody else drives like that also. It’s a little daunting but aside from that, we arrived unscathed and were excited to check out Lisbon.

We had planned 8 days in Lisbon in order to give us enough time to do all the Eurovision related stuff, as well as adequately experience the city, in addition to a day trip to nearby Sintra. In hindsight, this was way too long. We quite enjoyed Lisbon the first few days, although this was probably largely due to the fact that the weather was warmer than what we had in Madrid and we were able to walk around in singlets and shorts. The city centre is definitely aesthetically pleasing, and almost reminded us of a R E A L L Y old San Francisco … and not just because there is a bridge that looks identical to the Golden Gate Bridge. 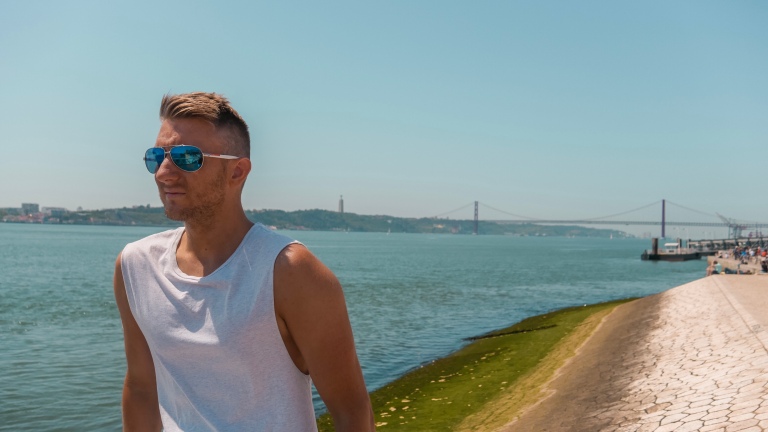 After that, however, the novelty of being in a new country and city wore off and our opinion started to shift. The food was bland and you constantly feel you’re being ripped off, the people in shops and restaurants were rude (although they generally speak better English than in Spain) and you cannot walk around the city centre without being hassled by groups of men asking you to buy drugs. Seriously, in the first hour and a half in Lisbon, we were asked NINE times. Apparently, they’re not actually selling drugs but a combination of whatever they can find that resembles marijuana or cocaine and it is due to the decriminalisation of drug possession a few years back. They aren’t aggressive and will generally leave you alone if you give them a simple “no”, but it was still annoying.

We stayed in the Alfama district, which is the oldest part of Lisbon (keep in mind, Lisbon is already one of the oldest, continuously inhabited cities in the world) full of winding, cobblestone streets and old stone houses. It is also the area where the famous Fado music comes from. Nowadays, this has been exploited and there are numerous establishments that are nothing more than tourists traps. Avoid any restaurant that offers a ‘meal and Fado show’ deal, as the food will be double what you’d normally pay and be of a lesser quality. We were warned against this, but after a day of walking all around the city, we decided to just have an easy dinner at São Miguel D’Alfama, which was right by our apartment. Food is food after all, and as long as we ate something, we’d be fine. How wrong we were. I ordered the ‘crumbed chicken’ and it was literally two small Ingham processed ‘chicken’ fillets. It was so bad that I could not stomach more than a few mouthfuls, despite being in a state of starvation. Our cans of Coke Zero were 5.00€ each (approximately $8.00 AUD) and, while there was a Fado performance, it was one that requested audience participation. Need we say more? To quote Nike, if a local tells you to avoid something; just do it!

Luckily, after this, we had a few days of Eurovision to look forward to. We had tickets to both Semi-Finals, in addition to the Grand Final, which kept us busy and sane, but there will be a separate post on that.

What to Eat: Pastel de Nata. Seriously. Hands down, the BEST thing about Lisbon are these little custard tarts. We were told that most people tend to go to Fábrica da Nata, but we were advised to not go there as it too has become a tourist trap, resulting in less effort going in to the preparation. Actually taking this advice, we had our first ones at Manteigaria and can say, after trying them at several other places throughout the city, these were the best. They have three locations around Lisbon, but the one we went to was on Rua do Loreto, near Praça Luis de Camões.

Where to Stay: It depends. Alfama if you like the really old vibe. Barrio Alto if you want to be among the nightlife and you enjoy walking steep hills. Otherwise, we would just recommend anywhere in the centre of the city around Rossio square. You’ll be within easy access to everything worth seeing and doing, including the Rossio Train Station if you’re planning day trips out of the city.

What to Do: Speaking of day trips, we would highly recommend a trip out to Sintra. This small town is about 40 minutes by train from Lisbon and set amongst the hills of the Serra de Sintra. It was popular with Portuguese royals and boasts numerous castles and palaces, including Palácio da Pena (Pena Palace) which looks like something from Disneyland with its bright coloured walls and towers. Be warned though, that due to its location in the mountains, it is several degrees colder here than in Lisbon. Also be warned that the palaces and old town of Sintra are a fair distance up the hill from where the train station is. There are tuk-tuk drivers who typically charge 5.00€ per person to take you to where you need to go, which we’d highly recommend because the walk would not be fun!

To sum up, our advice for Lisbon would be to not spend more than 3 days there and include a trip to Sintra. I’m sure other areas of Portugal have more to offer that you could combine with a trip to Lisbon, but we were so eager to get back to Spain that we cannot speak further on that.