To finish off our time in Spain, we spent a few days in the capital of Catalonia: Barcelona. The city has a very different feel to it than any other city we went to in Spain. Whether this is due to the population identifying more as Catalan than Spanish, or the fact it is has a large international population, we’re not sure, however it definitely appears to be the most liveable city in Spain for us.

We travelled to Barcelona by taking the EuroMed train from Valencia, a journey that follows the coast north for about 3 hours before arriving in central Barcelona. There is no high speed train connecting the two cities, however there is one between Madrid and Barcelona, which takes about half the amount of time.

“Axel Hotel”, in the Eixample neighbourhood, is one that caters to a mostly gay clientele, labelling itself as ‘hetero-friendly’. The location was very convenient with many restaurants of a number of different cuisines found within the same block. It is a short walk from here to “La Rambla”, the street in central Barcelona that is constantly full of tourists. The hotel also has a rooftop bar and pool which, despite not being very large, was never busy.

While waiting to be able to check in to our room, we went for a quick walk to La Rambla to have a look around and get some lunch. We ate at “Restaurant Nuria”, which is at the northern end of the street. They do a variety of food, from Spanish tapas to pizza and pastas, and although not the cheapest, they’re not overly expensive and the quality is good. Highly recommend getting the patatas bravas, a typical Spanish tapa item which consists of roasted potatoes topped with a spicy paprika sauce and aioli. Having eaten our fair share of these while in Spain, these were the best so far.

The highlight in Barcelona food-wise (but also probably just overall) was the “Taquerías Tamarindo” Mexican restaurant. Run by natives of Mexico, the food is simple, authentic and delicious. Mexican is one of our favourite cuisines, and this beats any other Mexican food we have eaten before, including in Mexico. We should point out though that this isn’t ‘Tex-Mex’ style (which we’re also big fans of), but authentic food with homemade tortillas and simple taco fillings.

So many of the attractions in Barcelona are centred around the architect Gaudi and his modernist designs. We are not, by any means, well versed in the ‘art world’, but his stuff is seriously overrated. It’s creepy and resembles something that should be in Alice in Wonderland. Nonetheless we decided to visit “Parc Güell“, a famous park in the hilly neighbourhood of Gracia, overlooking the entire city designed by Gaudi with some sculptures and monuments inside. We trekked all the way up there on foot, figuring we’d work off all the patatas bravas we had been eating over the last few weeks, only to find that the next entry time would be 6:30pm (it was 11am when we got there). SO, if you are interested in art, architecture, or walking up hills, book in advance to make sure you can get in to the park. Here is a photo from the outside though. 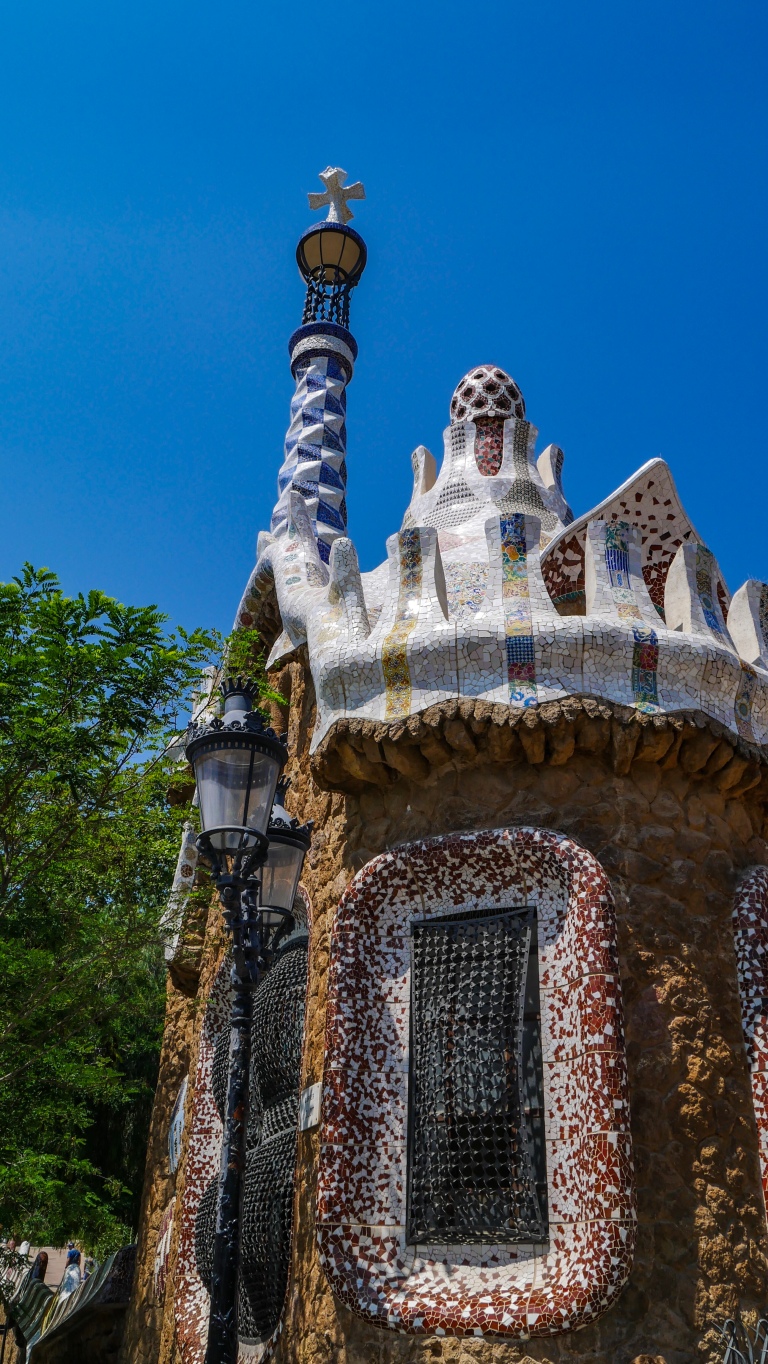 While we were in Barcelona, it was Nit de Sant Joan (Night of St. John) which coincides with Midsommer’s Eve and is apparently a big deal for the Catalan people. We knew that the main focus of the night is ‘fire’, but it took us a while to realise that the explosion sounds that were heard while walking around the Ciutat Vella area (recommend for some cool, independent shops), were from firecrackers and not something more sinister. We could tell quite a few people felt uneasy by it, probably more so since the van attack on La Rambla last year, so if you’re ever in Barcelona on June 23rd, that’s what all the loud bangs are. The centre of the ‘party’ on Sant Joan is at the beach, where people light bonfires and set off fireworks. We had dinner there, at a forgettable restaurant, and soaked up the environment. By the time the sun had set, the area was full of people dancing in the street and, somewhat recklessly, playing with fire.

“La Boqueria” market is a famous market place in the centre of “La Rambla” in the old city. Stalls inside sell everything from cured meats, to seafood, fruit and vegetables to lollies. It can get really hectic inside, but is worth checking out the variety of food in there.

Todd: The warm weather and liveability of the city.
Brodie: Nit de Sant Joan celebrations on the beach